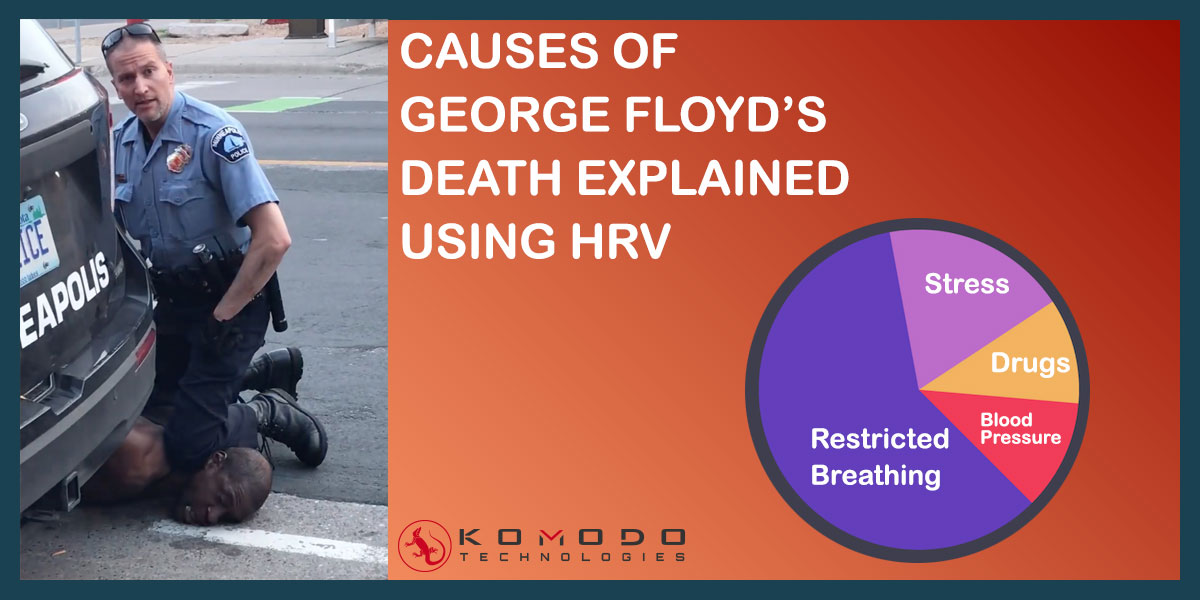 As the trial of Officer Chavin, and his involvement in the death of George Floyd, enters its final hours, we’ve seen a number of medical professionals, doctors, pulmonologists, etc. testify in front of the jury. While doctors will differ in their opinions on many issues, we look for a more definitive way to explain all of the factors that played in to the death of George Floyd.

As a note: this is not a legal review. We are not rendering a verdict or what we believe the verdict should be. It is simply a review of the medical evidence from the trial, and using the information to paint a clearer picture.

We don’t think that there is really any debate over the cause of death, even given the contributing factors. But it is important consider all of these factors and understand how they affect your heart, brain and internal organs and operation. The best biomarker that can explain all of these factors is heart rate variability (HRV)

What is Heart Rate Variability (HRV)?

Heart Rate Variability is a phenomenon that has been studied for several decades. It has become very significant in the medical community as a predictor of dozens of conditions relating to the heart, brain, stress levels and much more. Dozens of prominent companies have also invented wearable products dedicated for users to monitor their HRV at home.

In scientific terms, heart rate variability is known as the beat-to-beat variation that is standard in everyone’s heart rhythm (BPM). That variation is measured in milliseconds (As shown below).

No one’s heart beat is static. Meaning the time difference between each beat is different, which is a good thing. If it WAS static, you would probably be dead, or close to it.

In most cases, HRV is measured on a ‘score’ basis. Usually out of 100 (whereas the AIO Sleeve, for example, measures it on a 5-star scale). A High score is good. This means your heart rate will differ greatly (highly variable) from beat to beat. A Low score is not good. This would mean if for 10 recorded heart beats, the distance was 800 milliseconds between each.

The picture above is a great example. Pro athletes usually have amazing HRV scores. Healthy hearts, fast recovery, ability to adapt under pressure with least damage to heart and internal organs. On the other hand, someone who is overweight, bad diet, unhealthy lifestyle, high stress, will likely have a low HRV.

2 Things to note with regard to HRV and this case: In the recent years, studies have shown that heart rate variability is a predictor of sudden cardiac death. As well as other heart related deaths and diseases. So, we know, if variables are isolated, a low HRV can show a heart in distress. Till the point of death and near death.

Second, is the chain of events that occurs when HRV is reduced. This is the link between the brain, heart and amount of oxygen. This is very important. This will be discussed in later sections. There were hundreds of variables on that day that could have caused the HRV of George Floyd to decrease. It’s important to consider all of these factors and understand how they affect your body internally.

Yes, stress is real. Not only is it real, it can also be measured. HRV is not the only tool you can use to measure stress, but it is the most accurate. For example, let’s say a person is ready to give a public speech. It’s fair to say most people get nervous and will have some form of anxiety. In which case the brain sends a signal to the heart, causing its rhythm to change. That stress response can be captured using heart rate variability.

It’s fair to say George Floyd was under immense stress on the day he was killed. Not only physical stress, but emotional (mental) stress that came before the physical assault. Getting pulled over and pressed by police would cause most people to have a stress reaction.

Even before the physical altercation, George Floyd’s HRV would have already been lowered due to the stressful situation. This would make dealing with what followed even more difficult on his heart.

The fact that George Floyd’s breathing was being physically restricted, was significant. There was lot’s of discussion throughout the trial about fight or flight. This is directly correlated to heart rate variability. When in “flight” mode, or under stress, you’re heart is working extremely hard. Your brain is telling your heart to distribute more oxygen to other organs, muscles etc.

When the amount of oxygen that’s entering the body is being reduced (physically), this can cause great complications for internal organs, muscles and finally the heart. As time went on, stress grew, energy reduced (of Floyd) and the body was not receiving sufficient oxygen to redistribute. A Body can only survive for so long.

In the 9 + minutes of struggle, the HRV of George Floyd was gradually diminishing. If HRV was being monitored, you would have seen a warning sign of imminent death some 6 minutes prior to the death of George Floyd (refer to study referenced earlier). As Dr Tobin said in the trial, he was in fact able to deduce Floyd’s respiration rate from video. unfortunately, we couldn’t do that with HRV.

We now know that George Floyd had a fairly large heart. Larger than average. He also had some underlying heart condition including high blood pressure at the time the arrest occurred. It’s possible the high blood pressure came from the stressful situation, the intake of drugs, or other factors.

Meth and fentanyl can play a dramatic role in reducing one’s heart rate variability. It also depends on the amount and tolerance of an individual. Very similar to alcohol, each unique individual has a different tolerance level. Including the type of alcohol. Someone’s body might handle whiskey better than vodka.

At Komodo Technologies, we conducted an internal study (not yet posted) on how equal intake of alcohol effects each individual. Using the AIO Smart Sleeve to measure HRV beforehand and after each drink. The results varied significantly

Again, the evidence presented in the case don’t really tell the whole story. We saw the amounts that were in George Floyds system, but we don’t know the ‘real’ effect on his organs and heart. We just know methamphetamine and fentanyl lower HRV, in general.

When Floyd was on the ground, struggling with the officers, he was exerting a lot of energy. Much like when one lifts weights, there is an increased oxygen requirement from your muscles. Aside from all of the other factors, no George Floyd needed even more oxygen to go to his muscles given his movement.

This is yet another example of a factor that reduces your heart rate variability. His body was demanding a lot of him that day.

It’s true that each factor contributes differently to lower one’s heart rate variability. likely non have as significant of an effect as the physical stressor that was the restricted airflow caused by the officers knee. Not only is that the truth by HRV’s standards, it was also by the standard of the jury who made their decision today.