The Truth About Fitbit's HRV Features, Claims, and More

It’s been many years since Fitbit introduced anything of note, but is making an attempt to get out of its stagnant past by adding some additional features. That’s not to say Fitbit doesn’t make great products, but other health products are now so far ahead that Fitbit is simply trying to catch up. They finally created an ECG app, but upon doing some digging, it’s not even a real ECG. And of course, many are excited about the addition of heart rate variability ( HRV ) on Fitbit products. However, this new feature was welcomed with lots of confusion and disappointment.

When it comes to actual features, heart rate variability is the only important on that is available on the newer Fitbit models. Of course for some people, the look and feel of the product is important. Fitbit has done a great job in this area.

[If you want to jump right to the HRV section, it’s a bit further down the article]

As we’ve said in the past, Fitbit does a great job as a motivational device. But there are a few reason customers and fans should be concerned about their device, and the future of app updates and the like. Here are some:

Simply looking at the company’s financial history, it gives us some cause to pause. When Fitbit had it’s initial public offering (IPO) the value of its shares was $32.50 per share, even reaching values close to $50 per share. But in 2019 we see the company’s value drop to it’s lowest point in history at just over $3 per share. Now we’re no stock experts, but this does indicate uncertainty among investors with regards to what their future looks like. We did see a slight increase when Google purchased the company in late 2019 but no sustainable growth. in 2020, some (legitimate) blame can be placed on the COVID 19 pandemic as we’ve seen thousands of companies lose sales

How Accurate are Fitbits ?

Aside from the gloomy outlook, they’ve also been hit with multiple class action lawsuits over the years. One lawsuit in 2016 disputes the accuracy of multiple Fitbit products in regards to step counting and heart rate measurement. And in 2014 a total of 1.1 million Fitbit devices were recalled because some buyers had allergic reaction to the device’s materials.

To be fair, Fitbit disputes accuracy issues and calls studies “flawed” and claim that there have been studies to support that Fitbit products are in fact accurate. Maybe it’s all of the lawsuits that keeps Fitbit away from adding features like HRV and more health analytical tools.

The accuracy issue can be explained very simply. There is a flaw in how fitness bracelets and watches are designed. When tying your watch or bracelet, you will always tend to leave some room to allow circulation to your hand. While this is necessary, it creates an ‘air gap’. The space created by not tying the watch too tight creates a gap between the sensors and skin. These sensors are extremely sensitive and any production flaw like this will cause the watch to move around and create inaccuracies in recording data. The unfortunate reality is that this issue is unavoidable among smart watches in bracelets. Though there are alternative (later in this article).

Nevertheless, many people have been saying that Fitbit isn’t doing enough in terms of product development. They started out with the step counter in the late 2000’s and this was their claim to fame. Not only did they set out to make it the gold standard in health metrics, but they also built a community of enthusiasts who were constantly measuring, tracking and competing. Step counting continues to be their number 1 pitch to customers.

Not to mention the reduction in marketing and advertising spending ever since Google had purchased the company a few years ago. This could be contributing to the lack of sales, and consumer enthusiasm. However, the research and development spending has been increasing in the same time frame. So maybe they are cooking up something big as we speak.

Here is where the problem lies. The presence of Fitbit gave rise to so many other wearable technology products; Products that have taken it to the next level with regards to performance, form factor, design and functionality. Whereas Fitbit continues to stick to its guns with step tracking, other products are now performing full-time ECG readings, heart rate variability (HRV) analysis and stress monitoring.

We’ve seen over the years, Fitbit has slowly moved away from the fitness tracker market, and entered the smart watch market, moving slightly away from its core focus. There are now much better tools in the wearable market that can gather the same information that Fitbit can. A comprehensive study by the California State Polytechnic University showed that Fitbit products have “extremely weak correlation with actual users’ heart rates as measured by a true ECG.”

There is a significant rise in the amount of ECG wearables that are entering the market. ECG is a tool that is used to measure your hearts electrical and muscular function. It gives us the best look into how your heart is functioning. It’s usually measured by placing multiple electrodes on your body (12 in medical setting like a hospital). When it comes to wearable fitness and health trackers, there’s two ways to extract heart rate: optical sensor and an ECG. The difference in accuracy is very significant. More on that here.

The main drawback to ECG is that the visual doesn’t mean much to the consumer unless they are well versed in the field of medicine. Many of the devices simply rely on saving the ECG data so that you are able to pass it along to your doctor. This is good but there’s still a way that consumers can utilize this for greater health benefits.

That being said, Fitbit did create a new ECG application, but it’s extremely misleading to customers. According to their own manual, Fitbit states: “The Fitbit ECG software-only medical application is used to create and record an ECG, similar to a single-lead ECG. The Fitbit ECG app is qualitatively similar to a Lead I ECG”. So their smart watches don’t take a real ECG. To understand the difference, a standard optical sensor is what 100% of wearable products use to determine BPM. To record an ECG, you need a minimum of two electrodes so it can track the electrical activity of an entire heart beat. With the latter, you get a significantly more accurate picture of your hearts activity.

To better understand the difference; most optical sensor-based fitness trackers, the sample rate is 50 samples per second. That means it transmits 50 signals (data points) in a single second. The starting point for ECG sample rate is 300 samples per second. For this reason, Fitbit even claims that you should not use the ECG app as medical guidance. 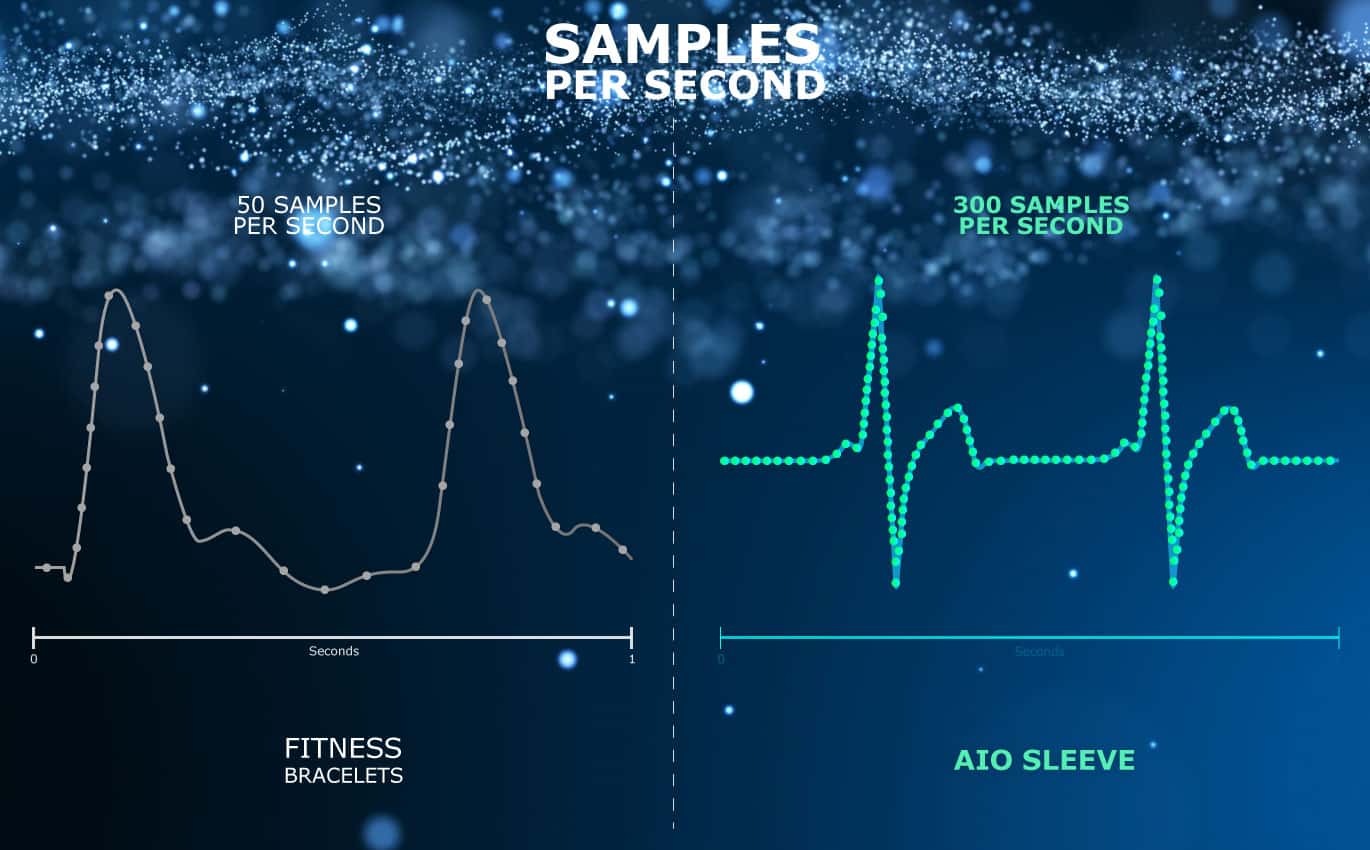 With their new ECG App, Fitbit is simply offering quick diagnostics, much like Apple’s ECG app. In order to do this, a company needs to acquire FDA clearance. Now here’s the sneaky part. Fitbit acquired a 510 (k) clearance, which is a seal under the FDA. Now this isn’t like any other FDA certification, this is a premarket authorization for health products. A certification that was created to circumvent the massive list of requirements needed for a real FDA clearance. Not only that, Fitbit received this clearance not for any of their hardware, but for the ‘ECG App’ instead.

ECG might not be very useful on its own but it’s what kind of data we can gather from it is where the benefits are. Heart rate variability (HRV) is quickly becoming the gold standard in measuring overall health. It has been around for decades but for the longest time was used by professionals; NASA, US Air Force, NFL & NBA teams and others. But with the advancement of wearable technology, this tool is becoming widely available to the every day consumer.

HRV is used to gauge ones overall health. It’s the only tool that can measure your stress level, recovery status from physical activity, your body’s reaction to food, your quality of sleep and more. For more detail and science stuff, check out this post. It’s an extremely unique tool that puts power and control in the users hands and allows them to closely monitor their lives and daily routines and get rid of negative factors to improve health.

There is a whole lot of confusion with the HRV function with Fitbit products. Simply take a look at the comments from their forum:

There are several issue with Fitbit’s HRV function. First, it’s unclear. They use the RMSSD formula to extract the HRV in milliseconds (as opposed to Apple which uses SDNN). That’s why you see scores of 20 ms, 30 ms, 50 ms and so on. RMSSD is the root mean square of successive differences between normal heartbeats. It’s not up to the user to figure out what that means. Other products out there do a much better job of humanizing this data and making it easy to understand.

Below is the full extent of literature Fitbit has on their website related to the HRV function.

It makes it confusing because Fitbit doesn’t provide a clear heart rate variability chart for users to analyze. they aren’t putting a whole lot of effort into this feature and it shows.

The second issue, as already discussed is the accuracy of the Fitbit heart rate variability function. Because they are using the optical sensor, and not an ECG to extract HRV, the reading will never be stable. And as with many wrist-based wearables, the sensors need to be right up against the skin. People tend to leave some room between the watch and skin (rightfully so). You don’t want to cut off circulation to your hand. This is a big concern among many wrist-based fitness trackers.

In the past few months, we have been seeing many complaints about Fitbit and other devices about not showing HRV. The issue is the way the data is captured. You need to be wearing it for a certain amount of time because it requires a large sample size. We did an in depth write up about HRV and different methods here. It mainly talks about the Apple Watch, but the way HRV works on Apple Watch and Fitbit is quite similar. 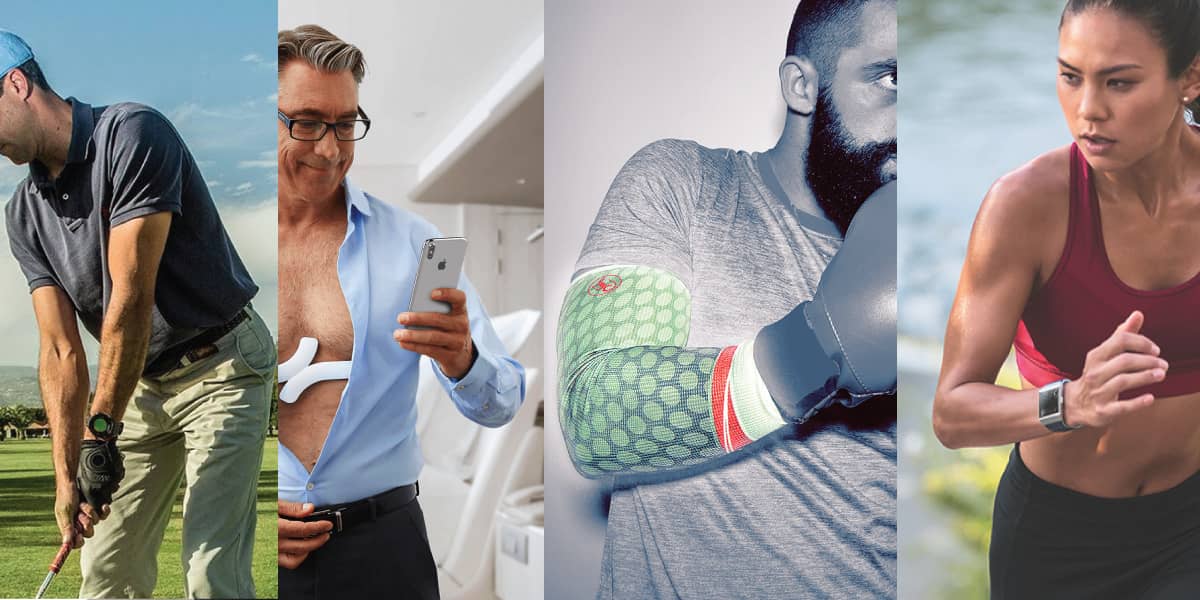 The Apple Watch also has an HRV function but is almost identical to that of Fitbit trackers. Whoop is a company specializing in this space and has garnered lots of notoriety. Whoop is now a long-time sponsor of the Joe Rogan experience. The product is a screen less bracelet with a monthly fee of $30. Oura Ring is another HRV tracker with a hefty price tag of over $300 USD.

The AIO Smart Sleeve is a pioneer in the HRV space. It’s the first ECG-based heart rate variability monitor on the market. It’s a smart compression sleeve with an integrated device that gives you a true insight into your overall health and fitness. It’s loaded with features. The activity mode shows you max and average heart rate, SPO2, activity intensity and more. While the health mode allows you to record a REAL ECG in real-time, as well as take an HRV. The data is saved in the history, and you are able to follow your own body’s trends and make adjustments to optimize your health.

We don’t want to diminish the impact Fitbit has had on the wearable technology market. Companies like ours, as well as Apple owe a lot to Fitbit. A company that single handedly motivated tens of millions of people to get healthy. But as the market grows, so does other companies’ research and development. While still the leader in basic tracking, it takes a back seat to many new comers with regards to heart rate variability.