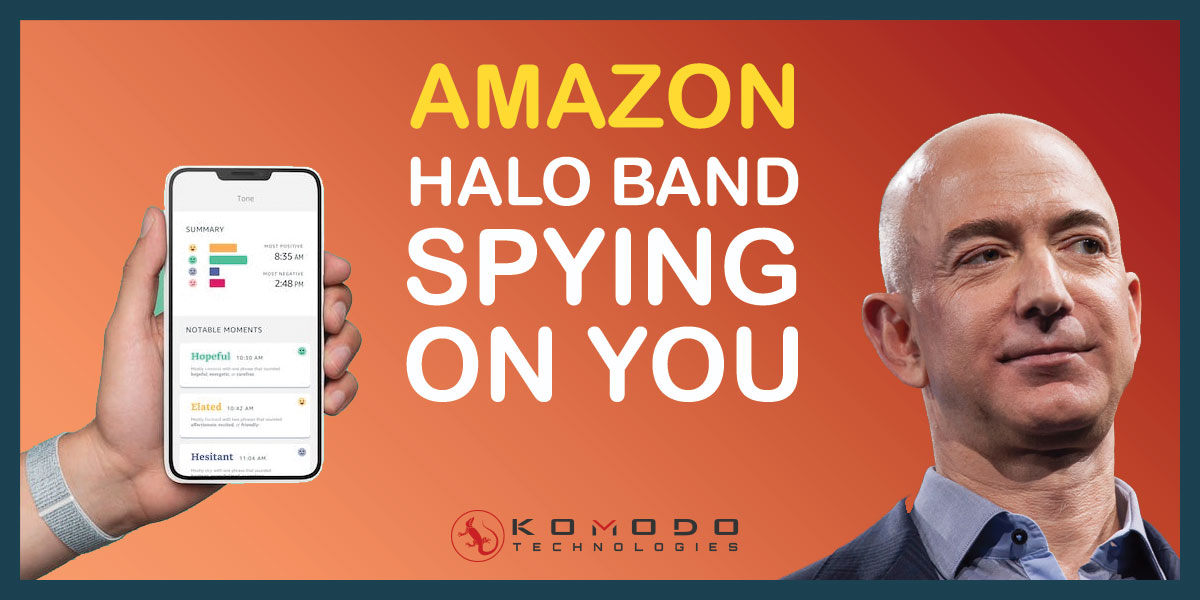 As Amazon unveils their new fitness tracker, the Amazon Halo Band, we did some investigative research into the health features and patents, which are part of Amazon’s bigger plan of total market dominance.

In the last 5 years we have seen some unprecedented growth in the market for health wearable products. What was once seen as a niche market has now welcomed some of tech’s giants like Apple, Google (and their purchase of Fitbit), and now the behemoth Amazon is making their not-so-quiet entry.

Because there are so many smaller wearable technology companies that have significantly more innovative products, there lots of ideas to “go around.” It looks like Amazon is doing just that, by borrowing ideas to integrate into the Halo Band. But at the same adding some new features that look impressive, but also make you scratch your head.

So, let’s take a look at the new Amazon Halo Band:

Many have made the case that the exterior design of the Amazon Halo band looks awfully similar to that of the Whoop bracelet. A one-time potential partner turned competitor to Amazon. And when looking and comparing the two products, you can see the resemblance.

The CEO of Whoop, Will Ahmed, even took to Twitter on the day Amazon announced its new wearable, to show his displeasure in the new product. He claimed his company had met with Amazon as a potential investor in his venture but conversation soured and they both went their separate ways.

Given that Whoop is one of the only wearable products that has a fabric-like finish with no screen and that Amazon has a history of cheap tricks, it’s completely plausible that this is where they got their idea for their new fitness band.

They also liked Whoop’s subscription model. So much that they decided to charge $4 per month (15% of the cost of Whoop).

Not much technical information is available about this feature, but there is some artificial intelligence at work here. The Amazon Halo Band can show you your body fat percentage. All you have to do is strip down to your underwear, take a picture on the app and wait for the results. Not creepy at all, right?

A feature that will probably get more accurate with time (most likely years). They’ll need enough people to volunteer, and enough time to their algorithms to parse the data in the picture for the app to be accurate.

When launching, Amazon announced that they’ve partnered with Weight Watchers on the project. This way, they will be able to promote specific Weight Watchers plans depending on what you look like in the picture you sent.

According to an Amazon patent, this feature is called the Emotion Recognition System. There is tons of research and innovation in the field of voice and behavioral AI and Amazon is no stranger to it.

The Amazon Halo Band actually has a microphone, that is on all the time and analyzes your voice and speech patterns and will tell you how you sound. Whether your tone is positive, negative, neutral, sad, angry… you get the point.

Here’s an excerpt from one of Amazon’s patents:

“pleasantness, relaxation or calm voice patterns are recognized in a particular speaker as having low to medium/average pitch; clear, normal and continuous tone; a regular of periodic cadence; and low to medium amplitudes. Conversely, unpleasantness, tension and excitement are recognizable in a particular speaker’s voice patterns by low to high pitch (or changeable pitch)’ low, high or changing tones, fast, slow or carrying cadence and very low to very high amplitudes”

So what’s the point of this really? To the customer, it’s a bit un clear. Amazon is trying to help you fix your tone given the situation you’re in. How to sound professional and calm in an interview and telling you how you sound to your kids.

Again, there’s probably more benefits to Amazon. As stated in their FAQ page, “Tone works best for American English speakers, but Halo is always getting smarter”. Again, much like the body fat scanner, they need enough data to perfect whatever it is they’re trying to do.

What About Real Health Features?

The body fat scanner is really the only new health feature, all of the other features on the Halo band are kind of ‘old news’. But it’s going to take years before its perfected.

Now those who are serious about health and fitness products don’t find the Amazon Halo Band all that impressive. Some high-end products have heart rate variability (HRV) monitoring. This is a biomarker that is quickly becoming a gold standard in personal health and fitness tracking.

HRV is a tool that has been studied for decades. It and monitors an individual’s heart rate pattern and can provide information regarding ones stress level, sensitivities to foods, workout recovery, and a whole lot more.

Amazon’s Halo Band is unlikely to be a head-turner with the more serious health and fitness crowd.

Amazon’s Big Plan (Are They Spying on Us?)

Many Americans and beyond have made the accusation that Amazon is engaging in large scale spying on individuals. Many will call it spying and unnecessary surveillance, but Amazon calls it customer service.

Just remember, Amazon’s goal is not to sell you a product, it’s to sell you multiple. Amazon has made a history of selling their own products at cost. Jeff Bezos, Amazon CEO even admitted to this during a Capitol Hill hearing with all of the big tech chief executives.

What They Really Want

If selling said products at cost gets an Amazon item onto the wrist or into the house of more North Americans, that’s a trade-off Jeff Bezos is willing to make. Because at the end of the day, that user data is invaluable to Amazon and its partners.

Alexa is the best example of this. Take a look at this patent from 2011 for the Alexa, before it was even it even had a name.

Not only was the Alexa created to help you turn the lights on and play your favourite music; it was intended to do a whole lot more. It was made to analyze your voice, behaviour and even the noises you make. In the picture above, what is now known as Alexa, would realize when your coughing, know that you might be sick and then see whether you wanted soup recipes or order you cough medicine from Amazon’s website.

This is to the point that Amazon wants to use their products, to sell you other ones and more of them.

In this patent filed by Amazon, they developed a system that would used your smart phones location to provide you with discounts if you were ever in the area. Let’s say you were browsing the Home Depot website for some equipment. Amazon would use that metadata from your smartphone. And next time you were in a 5 mile radius of a Home Depot, you would get notifications sent to your phone. You would receive coupons, promotions, etc.

We haven’t seen this idea come to fruition but it does coincide with how Amazon operates.

What Does it All Mean?

If you listen to Jeff Bezos enough, his main goal is to provide the best customer experience imaginable. It’s a sentiment he repeated over and over again during the hearing. it’s no question that Amazon see’s people as data. They want that data, they want to be in your home, but the reason? Whether you believe Bezos and he is using this data for good or in the long run this data will be used immorally.

It’s only natural to buy from a big brand. It’s a household name, they are reliable and they have 2-day shipping. However, if you’re serious about health and fitness, this is not the best product. The two main features of the Halo Band are essentially in beta mode. They are test features and the public is the subject. Many companies will do this. The analysis you will receive now will be somewhat accurate, but not completely. And this is how artificial intelligence (AI) works.

They will use the band to learn, much like Amazon did with Alexa. They will study patterns and behaviour of millions of users. And in a few years time, they might perfect their product, and you will have increased your spending on Amazon’d website. Always remember, Amazon is not a hardware company, they are an advertising company. Everything they do is for the purpose of advancing their website sales. There are other wearable products with much better features.

You must know before you buy!