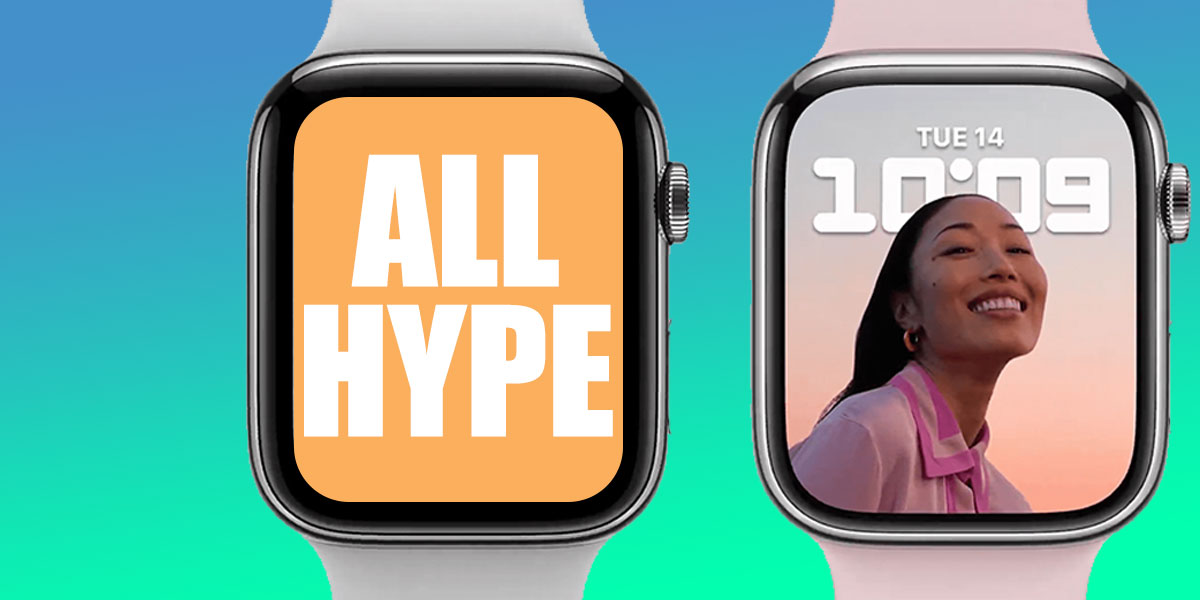 It has now become a yearly tradition for our team of wearable technology experts. Watching the Apple Event that features a new watch, to analyze the features and provide analysis on what this means for the market and weighing the pros and cons. We’ve done so for the past 3 watch models (series 4, series 5, series 6). Now we’ll dive into the Apple Watch series 7

What’s been evident among the Apple Watch line is that this is clearly not their main product line (Duh!). Apple can put their logo on virtually anything and it will sell. It often seems this is what they are doing with all products that aren’t computers or smartphones.

WHAT IS THE APPLE WATCH REALLY?

Obviously the company has invested significant resources into the Watch line in attempts to be competitive in this market. But it’s important to differentiate the wearable market. There are smart watches, health wearables and fitness trackers.

There is little doubt that Apple has the best design and functionality of a smart watch, but they have been making a serious push into the latter market of health, wellness and fitness. Simply having copied from the markets leaders, we’ll see if they can actually develop something on their own with the Apple watch series 7.

Once you get passed the noise, flashy vids and the distractions, here’s what we really see with the Apple Watch Series 7:

The only thing we saw here was a conceded effort to create a better fitness tracker for cycling and cyclists. Among the software features included are fall detection, workout stops (pauses) when you do as well as a “more accurate calorie counter” (in their words).

Not sure why fall detection is necessary at all. In other markets, this is great for older individuals and caregivers to have peace of mind. But if you can get on a bike, falling is not something of concern, especially to those in this market segment.

The “more accurate calorie counter” is also not what its hyped up to be. There’s a bit of a secret in the health (and all tech for that matter) market in regards to terminology. When companies mention ‘algorithm’ in new products, BE CAREFUL what to believe.

Often, companies will use one sensor and create hundreds of algorithms on how we can interpret the data. Garmin does this (among many others; Fitbit, Apple) very well. They take the accelerometer and recycle the data from that sensor to show your different things. i.e. golf swing, calories, intensity, speed, distance, bat swing, etc. Sometimes it’s legit but other times it’s not.

As disappointed as we usually are with the REAL features, biometrics and biomarkers, nothing can be said about the design. It’s beautiful. 20% larger display than the predecessor and 1.7 mm borders. They’ve created rounded corners and made the screen 70% brighter.

Apple claims the new Watch series 7 is the most durable watch they’ve ever built. They site a IP6X certification, which essentially means it is completely dust proof. There is an IP4, IP5 and IP6, which is the highest grade of anti-dust rating. As defined by the International Electrotechnical Commission (IEC)

Now to the tail end of an already, uber exciting events. When a text message comes through on your iPhone, you can now see more of the message on your wrist. Perhaps because of the size increase of the Apple Watch Series 7, but they also said they’ve adjusted the word count in the firmware.

Briefly described was machine learning text. It learns your typical text patterns, what words and emojis you use over time and created suggestions.

Apple says the new watch will charge faster than previous models, will come in 5 new colors and that the watch frame is made from 100% recycled materials.

It’s tough to know which business does Apple love more, hardware or software. Because if the incredible margin on software, they are doubling down on Apple Fitness Plus. They are adding new content every week in 4K definition. New workouts, trainers, exercises, you know the deal.

One of the new features is group workout. they are really making the case you should be choosing between a Peloton Bike or the new Apple Watch Series 7.

To be completely honest, out of the prior write-ups and videos we did of Apple Watch announcements, this one was the worst. Least exciting and basically no new features. It felt like they just needed to fill a slop on their big stage. Often people don’t worry about the product, it’s more about the show for Appl fans.

There we rumors that Apple was actually going to add new features. A Glucose monitor like Dexcom, as well as other health biomarkers. But zero were announced. This could also be because of the global chip shortage that has plagued the world for almost 2 years now. Trust me, our company feels it too. We’ve even had China-based suppliers as US if we have certain chips and parts.

When the series 6 came out, we wrote an article saying it would be the last. Technically we were wrong, but there wasn’t a whole lot added to the Apple Watch series 7. After 7 versions, we were hoping it wouldn’t be just a design change.

We’ve been urging for the longest time for a better heart rate variability (HRV) function. There is still an HRV feature on the apple watch but very minimal effort has been put into it. Who knows if we’ll see some improvements on the series 7 but they did not mention it.

HRV is slowly becoming the gold standard in personal health and fitness so it would be great to see Apple join a host of amazing companies who already do HRV. The market is quietly growing and should blossom in the next few years.

SHOULD YOU BUY AN APPLE WATCH

I would say 40% of people who buy apple products don’t even care about the specs and simply buy the logo. For the 60%, ask yourself a few questions; What’s my budget? Do I need a smartwatch or a health tracker? What biomarkers are important to me?

All Apple products are expensive, but you might not need one anyway. It’s tough to say that Apple Watch is the best option for health and fitness tracking. In fact it’s nowhere near the top of our list. It’s simply a beautifully designed watch that easily integrates if you already have appl products.

If you’re looking for activity tracking, there’s Fitbit and Garmin. If it’s glucose, then Dexcom. For heart rate variability there’s AIO Smart Sleeve and Whoop. For sleep there’s a whole host of trackers. But you need to figure out what it is you’re looking for. Don’t be fooled by a shiny box and an Apple logo. They are great products, just not for health.